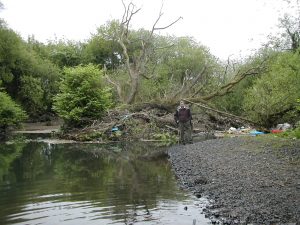 Walk Over Surveys on the River Ely by Natural Resources Wales (NRW) had identified several major tree blockages on the river that would hinder of even stop Salmon migration. Working on this one would allow migratory fish access to an additional 12Km upstream of Miskin to utilize the spawning gravels in the headwaters and tributaries of the River Ely.

The log-jam consisted of approx. 16 very large trees and root plates which blocked approx. ¾ of the river width and extended downstream for approx. 20metres. It had been  compacted with silt over time making for a difficult removal and the blockage had created excessive erosion of the LH bank and excessive silt deposition on the RH bank due to deflected high winter river flows.

We are obliged to find land owner ships for permission to access the site in the case of  this log-jam it proved very difficult, but eventually, with NRW assistance we managed to identify and contact the various land owners and obtained their permissions.

Clearance work eventually commenced but stoppages due to high flood water levels and unsafe working conditions were a problem. Work was however eventually completed to our satisfaction.  Because there was no effective machine access to the site, the contractors had to use portable hand equipment (Winches,Tirfor and Chainsaws) and had great difficulty in removing some of the very large root plates. We then made a conscious decision to leave any difficult to move in the river close to the  bank, which created a feature, which helped to improve the river habitat (large woody debris) ensuring that all the protruding limbs had been removed preventing the trapping of further debris in the future. 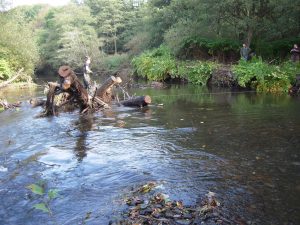 Photographic evidence of the multi-tree log-jam before, during and after clearance work shows details of the initial problem, gradual progress in clearing, and finally the cleared site. The removed woody materials were removed away from the river and stored on the bank among the vegetation. Some of the largest tree trunks were laid into the river bank as revetments to help regenerate the eroded areas of river bank 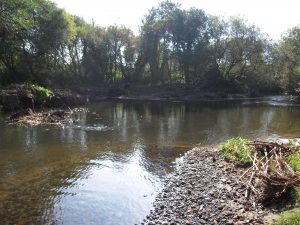