Rationale: Gareth Edge Taff Bargoed Project Officer:  After my first workshop with Trelewis Primary, very few of the children knew what an Otter was. I wanted  them to be able to get up close and personal with an Otter, as I firmly believe experiencing the natural world first-hand is key to learning. 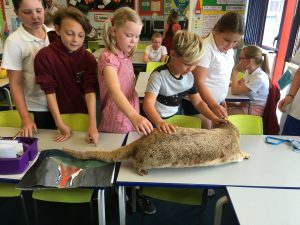 Idea: After speaking with Becky Davies (Natural Resources Wales NRW ) at a meeting she offered us the loan of a stuffed Otter called Hector, from the museum in Cardiff, ( Hector was sadly a road kill) that could be borrowed to show them. I decided “Hector meets…” would be a brilliant introductory element to my workshops. The children get to meet Hector, stroke him and ask open questions to learn, for example: “Where do Otters live?” “What’s an Otter’s poo called?” “How do Otters see underwater?” –  learning new words such as: holt, spraint, bubble-skein and nictitating membrane. 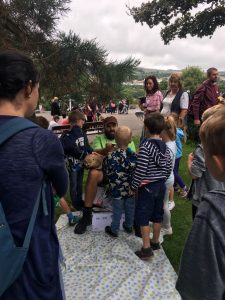 Outcome: Hector has met over 200 children this summer throughout the borough, at schools such as: Trelewis, at events at: Cyfarthfa Castle, in the woods at Nant Llwynog Parc, libraries in Merthyr, Aberfan, Dowlais and Treharris. Many of these children had never seen an Otter before, let alone stroked one! I have also used the Otter poem from the book “The Lost Words” by Robert Macfarlane and Jackie Morris in the sessions.