Creating an easement over the old water abstraction weir immediately downstream of the Tunnel at Ynysybwl on the River Clydach,            Grid Ref. ST 06058 94259.

To allow migratory fish to access an additional 4 KM (approx.) upstream of this barrier to reach the spawning gravels and nursery areas of the River Clydach and its tributaries.

This Barrier to migratory fish was identified by EAW representatives, during a walk over survey and SEWRT volunteers visited the site during 2009 and again in July 2010.

The barrier comprised a concrete weir approx. 1metre high, across the full width of the weir with a shallow plunge pool (approx. 0.4 metres deep) downstream, necessitating the migrating fish to jump the 1 metre approx. to overcome the barrier, which could not be achieved in all but high river flows.

Various options were considered and eventually it was agreed that the best option would be, to build a pre-barrage type boulder weir downstream of the existing weir, to effectively raise the level of water in the existing plunge pool, thereby reducing the height of jump necessary to approx. 0.3 metres. which was considered acceptable.

Establishing land ownerships for permission to access the site to carry out this work proved very difficult. However, with the help of the EAW we managed to identify all the landowners concerned and eventually obtain the necessary written permissions.

Construction of the Pre-Barrage type weir commenced on Monday 11th October 2010 and was completed the following day, which also included some bank stabilization and reinforcement work on the R.H. bank downstream of the weir. 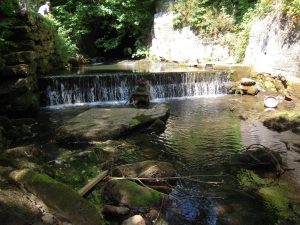