It had been constructed of un-reinforced plum concrete and consisted of 5 steps each approximately 150mm tall with a horizontal spacing of 300mm the flat top of the wall is some 450mm wide. Due to its flat top, in summer flows, the water is spread over the entire 8 metre width of the weir and is hence very shallow and impassable to migratory fish. The flat top would also be difficult for fish migration as even in a flood the depth could be insufficient for fish to pass over except in the highest of floods.

Removal of the weir would have caused the river bed to drop by at least three quarters of a meter putting at risk the river walls that had been built upstream as part of the weir structure. It was decided to cut a partial notch into the structure some three hundred Millimetres deep and six hundred millimetres wide off set to one side towards the east bank so as to lessen any likely hood of river bed erosion. The east bank was concrete covering an old pipe this would help to concentrate the flow so important for migratory fish.

The notch width of 600mm would be sufficient to contain most of the summer flow. Concrete wing-walls were chosen to strengthen the notch because of their relatively low cost, robustness, ease of construction and resistance to vandalism or theft.

Effect of the works

The previously mentioned pre-works summer flow was as little as 1cm deep over the whole width of the weir, which was a significant obstacle, following the works most of the flow in these conditions is through the notch and chute with a water depth in the chute of around 150mm. In higher flows the tongue of faster water downstream produced by the chute should prove to be a strong attraction to migratory fish. 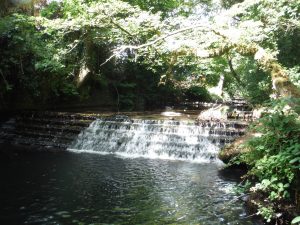 The weir looking upstream prior to work commencing 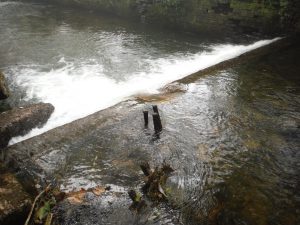 Notch cut into the weir before the building of the chute 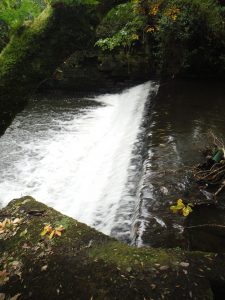 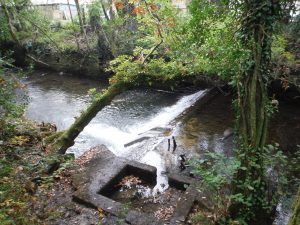 Complete. With strong flow into the pool below which will attract migratory fish