The river runs through the parish of Llanwonno and was a mainly farming community until the sinking of the Lady Windsor colliery in in 1884 within two years the colliery became operational and until this day the valley shows the scars from this industrialisation. I was linked underground to the Abercynon colliery in 1974 but was closed in 1988 after the miners’ strike of 1984 with 25years of workable coal reserves still there. For more information go to Rhondda Cynon Taf Library Services.

The Trust has carried out various improvements to fish passage on the river to improve fish passage due to the weirs and barriers that were installed in the river as part of the mining process. We also work on the natural obstructions that occur such as tree blockages. On the Afon Clydach the area in the Llanwonno Forest upstream of the Ynysybwl to Perthcelyn road was found to have a significant number of large trees that had fallen in and across the watercourse. They were catching a significant amount of rubbish and in some cases a full blockage of the river was being made. 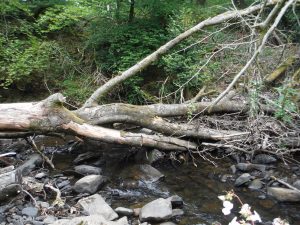 Natural Resources Wales our partner asked us to remove some of this woody debris in particular material that was causing the litter blockage. Larger timbers particularly if they point downstream from the bank were marked to be left as they contribute to habitat by causing scouring around themselves and deposition of finer woody and gravel material around them at higher flows. Most of the area of work was on Natural Resources Wales land. 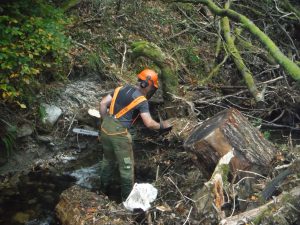 Work was carried out in October 2018 and the resulting timber stored on site sufficiently far from the river to prevent its re-entry. This also helps improve the bio-diversity of the area. As there was sufficient time some smaller trees that had come down over the right of way along the river were also removed. This ensured that they were not use to form more blockages 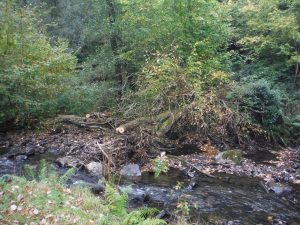 Following this and the remediation works at Glyn street weir the significant remaining works on the Clydach are:- replacement of the Ynysybwl tunnel left baffle (Flood damage) and the control of shoaling at the confluence with the Taff near Abercynon.