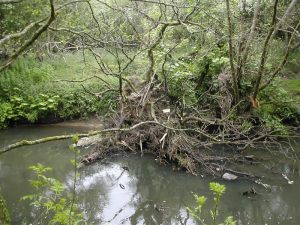 Clearance of multi-tree log-jam on the River Ely at Peterston Super Ely. This was part of the work that had been previously notified to us by Natural Resources Wales (NRW) that was delaying fish migration on the Ely. By clearing this we gave  migratory fish easier access to an additional 10Km upstream of Peterston Super Ely to the other log-jam at Miskin, and to eventually access to the spawning gravels in the headwaters and tributaries of the River Ely

The blockage consisted of approx. 8 medium sized trees and root plates which blocked approx. ¾ of the river width and extended downstream for approx. 10 meters. It had been compacted with silt over time adding to the difficulties for removal and the blockage had caused some erosion of both banks, due to deflected high winter river flows.

Establishing land owner ships for permission to access the site of this log-jam again proved very difficult, but eventually, with the  assistance from the contractor who was local we  identify and contact the various land owners and obtained the necessary permissions.

Clearance work eventually commenced straight after the work at Miskin and was this time completed to our satisfaction in one day. There was reasonable vehicle access to the site of the log-jam, allowing the contractors to utilise mechanical   lifting equipment, together hand pulleys, Winches, Tirfors and Chainsaws.

The photographic evidence of the multi-tree log-jam before, during and after clearance work shows details of the initial problem, gradual progress in clearing and finally the cleared site. As is our preferred option the woody materials were removed away from the river and stored on the  bank among the vegetation for use as habitat for wild live as it rots down 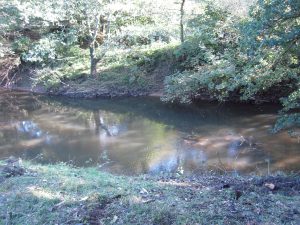 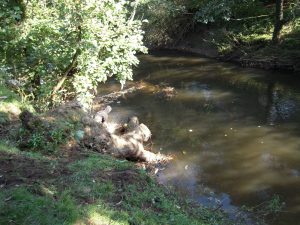 Funding for this project was provided by the European Fisheries Fund (EFF), via the Welsh Assembly Government (WAG).