One of the best Salmon spawning brooks on the River Ely as indicated in data from Natural Resources Wales is the river Muchydd.

It joins the Ely at the Llantrisant and Pontyclun Golf club after its journey from near Trebanog in the Rhondda  Valley. A look at the map will show the myriad of small streams that make up the watershed. A natural watershed by today’s standards with only small ponds along its length, some man made but not a reservoir along its entire watershed.

This is what can be classed as a stream as nature intended for the spawning and breeding of migratory fish. However a weir installed to take water from the stream to supply a trout farm was causing a blockage to migratory fish.

The weir was no longer in use and negotiations with the owner of the weir and the land owner on the opposite bank gave the Trust permission to remove it.

Bank erosion had taken place, so this need to be taken into consideration during the removal. Despite the breach, this weir was impassable at low flows, particularly important in a small brook like this. Removing it has given access to a further 3km of the Mychydd for salmonids, although the upper reaches would be mostly brown trout habitat. 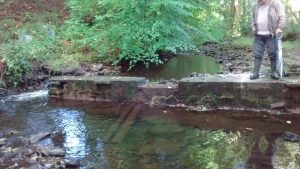 This old weir was causing the river to wash away the bank of the left of the picture, it was also a impediment to all fish migration. 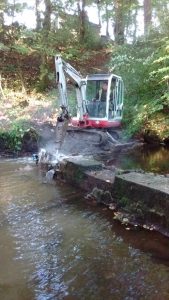 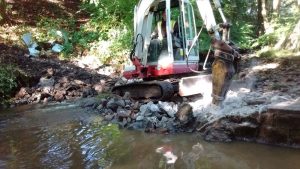 The weir being removed 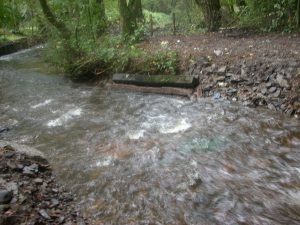 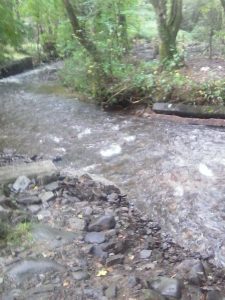 The completed work shows the Gravels exposed after the removal of the weir. The natural flow of the river has been restored this however can alter and  fish can now travel up the head waters of this clean natural river without having to face any man made obstructions